Thanks. Just saw that and WLAJ/WLNS on 14.

The testing at WLAJ/WLNS is on again right now as I'm typing this... just hooked up my converter box (the only ATSC tuning device that allows me to punch in an actual RF channel via remote without a full scan), punched in . (to be able to punch in RF channels) , then 14 (the repack RF channel for WLAJ/WLNS), and both stations are running regular programming on their channels (6.1 for WLNS CBS, 53.1 for WLAJ ABC, and 53.2 for WLAJ CW). Even the EPG info is available.
(I even took pictures of this test, which I'll upload before too long.)

While a previous test from last night didn't get me anything, I can imagine that these brief 'test broadcasts' discussed here will only become more frequent (assuming that they're signing off their post-repack transmitter after a short period until the next testing time) leading up to January 17th. (WLNS/WLAJ is telling viewers to run their rescan after 12:30pm on the 17th - I assume at that time, their Rives Junction transmitter on RF 25 will finally be shut off as required.)

(I also found it rather interesting that after I punched in the RF channel 14... WLNS-TV 6.1 came up first instead of WLAJ 53.1 - the latter being the "channel share host" for WLNS.)

EDIT: Here's my photos of the test (for the record, it's on a kitchen counter, since the kitchen windows that I placed my antenna at are facing west, and no, I'm not stupid enough to run water in this situation): 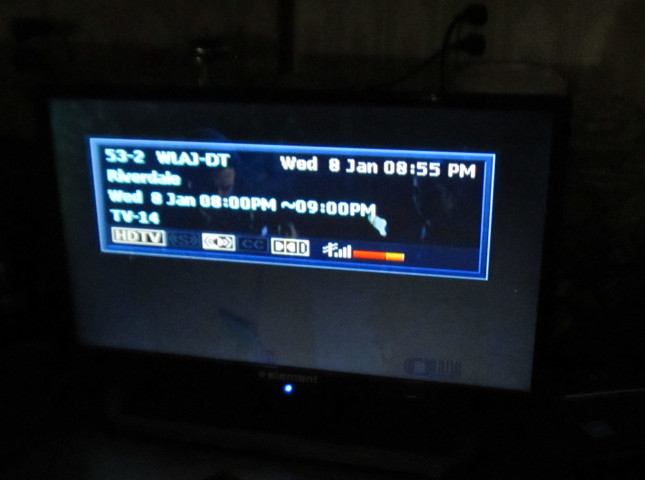 My location is northwestern Lapeer County, BTW. (lived in that general area for my entire life, and used to be able to get both the WLNS analog VHF 6 and their former UHF 59 and 36 digital signals, albeit with an outdoor antenna).
I didn't want to run a whole rescan on the TV itself just for this test, hence my usage of the aforementioned converter box.

Anybody that supports suspending Constitutional freedoms/liberties during a pandemic is ANTI-AMERICAN!

You got them from an antenna in your window??
That's a long haul!

Yeah.... I do believe it was due to DX conditions last night, though. I was expecting a 'test pattern' on RF 14 similar to your seeing the color bars on WSYM 28.1 in your original post.

Anybody that supports suspending Constitutional freedoms/liberties during a pandemic is ANTI-AMERICAN!

I'm just under 60 miles WNW from the Okemos tower and have been receiving the new signal quite consistently.

I have a ClearStream 4 on my roof in extreme eastern Kent county, and the radiowaves are strong enough for sidelobe reception.

Whenever I've checked, it's been actual programming, not just a test pattern. A new contributor Dan to the live bandscan of RabbitEars who is located in Lansing has the logging history showing the RF14 broadcast has been going with no interruptions since on or before January 7th:


The station filed a Program Test Authority submission for RF14 to the FCC on 1/10, and approved on 1/15. The layperson I am takes this to mean that they can keep the broadcast going on through their filing of the License to Cover:


Back when they filed their most recent Minor Modification in August 2018, declaring their intentions to move to using the longstanding WLNS tower with the increased ERP, it really caught my eye for how much more audience they would reach. RabbitEars has an estimated population calculation available when you expand a station's "Technical Data" section:

Notice how the existing WLAJ signal from Rives Junction cites almost 1.9 million people. The new RF14 signal calculates out at over 4 million! I poked around the day I was looking, and this new WLAJ/WLNS potential audience number is the only one over 4 million outside of the Detroit DMA stations. Even in my home market of GR/West Michigan, the biggest stations are only estimated at 2.5 million.


It's fun that I might get WLAJ/WLNS rather consistently going forward, but honestly I'll likely not watch it, given that all three of it's channels/subchannels are triplicates for me. But I guess I'll be ready for that rare NFL Sunday afternoon when WLNS has a different game than what WWMT and WWTV are providing.

The range is roughly equal to the old WLNS channel 6 VHF signal.

WSYM is at reduced power, on their interim antenna. The new top-mount antenna will be set with a helicopter lift on 1/23, weather permitting.
Till they get to full power on the new antenna, people trying to get WSYM with indoor antennas will likely have a hard time getting that signal.

For those in the Lansing area, I'd be curious to know how receivable (or not) the Grand Rapids - Kalamazoo area stations are.

Just West of Birch Run and with a flat paper/plastic in house antenna, that blowtorch of a signal comes in better than 5 or 12.

The 6/53 contour map is a large area, just like a previous poster said, like the old 6 VHF pattern.

13 would be difficult even if it were on UHF as its stick is in southwestern Newaygo County. The Flint/Saginaw UHFs would be much easier than 13 from just north of Lansing

13 would be difficult even if it were on UHF as its stick is in southwestern Newaygo County. The Flint/Saginaw UHFs would be much easier than 13 from just north of Lansing

True. During analog days 3 and 8 reached Lansing, but not 13.

During analog days WLNS was considered to be in the Flint market.

Now that the 17th is past, how are you all receiving WSYM and WLAJ and WLNS?
WSYM is on a temporary antenna, but are expecting to be all done this week I am told.