Registrations in the queue through May 14 at 7:00a ET have now been activated. Enjoy! -M.W.

The technical side of broadcasting. Think IBOC is a sham? Talk about it here! How about HDTV? Post DX reports here as well.
Post Reply Previous topicNext topic
9 posts • Page 1 of 1

This was another one I lusted after, back in the day. Early 1970s after I was married.

It sold for about $150. Far more than a week's pay. I actually started saving money hoping to get it some day. Two dollars here, four dollars there, three dollars there. Of course, every time i had it built up to thirty or forty dollars, something would come along to take it. Car repair, shoes for the kids etc. Then I'd start all over.

During the seventies inflation was rampant and the price of the radio kept going up every year. I never came even close to ever being able to buy one.

A guy I worked with had one. An older guy who had reached the sweet spot in his life where he could afford toys for himself. He let me go to his house and try it out 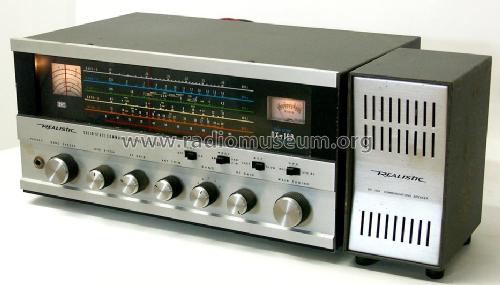 Yep that was a neat looking receiver !
I was really lucky to have a great Uncle, who was a diemaker and had no Kids, so he had more $$$ than my Father. He was good enough to gift me a new Hallicrafters S38D for Xmas in 1957.
I was out in the snow the morning after Xmas climbing a tree with a 50 Ft. scrap piece of wire out my bedroom window and up in trees.
A great General purpose receiving antenna !
I went Crazy doing BCBDX and SWL work from then on !

I bought my DX-160 back in '76. Still have it. The only antenna I have on it is a straight copper wire about 10 feet long. Have logged all continents on it except for Antarctica.

If it aint country it aint music

Now that we are at a solar activity minimum the higher HF bands are not producing many long distance signals, the lower frequencies really shine.
Ten ft of antenna is a V E R Y small fraction of the wavelengths that are active.
You could do SO MUCH better with a longer antenna wire !
Wire length in Ft=234/F in MHz. for the optimum wire length for a given Frequency.
I am guessing antenna theory is not your primary field of interest

I had one, and I loved it. The speaker was awful though, and I changed a few parts in the audio section so that it restored audio response from about 100Hz to around 10kHz. I loved the LW band on this back in the day, when you could actually hear Euros coming in, especially in the winter.

I have it's little brother, the DX 120 now, which is a very nice little radio IMO. I'd love to have another DX160 though.

I have two of its predecessors, both gotten for free. A DX-150 from my late father-in-law, and a DX-150A, from a neighbor who was moving and had no interest in keeping it (plus a set of antique magnetic headphones-classic "cans"). I'm not sure what the difference is between the 150 and the 150A; they both seem about the same. The BFO on one of them is very unstable, so not useful for CW or SSB copy
Like most "slide rule dial" receivers of this class, even with bandspread tuning, frequency accuracy and selectivity are not that great, but for its time, a very adequate SWL radio. The DX-160 must have improved on the 150 enough to get the model number bump.

The radio we all lusted over like a hot 21 year old, and never had enough money to afford either. I have a speaker for one, incase I ever find one for sale at a hamfest below the original retail price.

The DX 160 added LW and BC bands, plus had some tweaks to improve things. For it's price range was a very nice communications receiver.

WOHO wrote: ↑
Sat Dec 07, 2019 1:56 am
The radio we all lusted over like a hot 21 year old, and never had enough money to afford either. I have a speaker for one, incase I ever find one for sale at a hamfest below the original retail price.

I see these on Ebay quite often. Nearly all of them will need new capacitors if they haven't been changed out already. However, they are very easy to work on and had fairly spacious circuit boards, especially compared to modern electronics.