Registrations in the queue through June 26 at 9:30p ET have now been activated. Enjoy! -M.W.

The technical side of broadcasting. Think IBOC is a sham? Talk about it here! How about HDTV? Post DX reports here as well.
Post Reply Previous topicNext topic
21 posts

Below is a comparison of the daytime groundwave fields of WJR and WWJ* for a range of 10 to 60 radial miles from their respective transmit sites.

The compass bearing for this radial is in the direction of the maximum power radiated by the daytime array of WWJ, which is oriented at N335°E.

WJR is about 10 miles closer to the Detroit metro area than WWJ, so in each case along this radial, the field of WJR at a given range would correspond to the field of WWJ at range 10 miles further away, along that radial.

* based on the appropriate groundwave propagation charts of the FCC 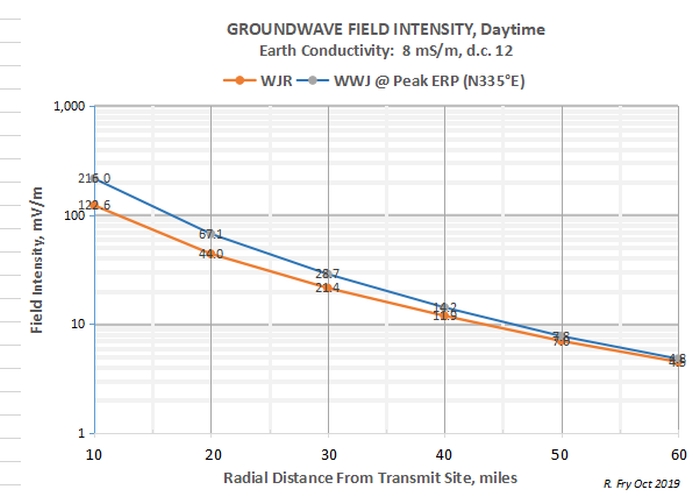 So are you saying in Toledo they should be equal, or am I off (yeah, I know)

No, WWJ does not have same field in/near Toledo as WJR.

The chart shows the WWJ field along an azimuth bearing of 335 degrees from their transmit site. Toledo does not lie on that radial. WWJ is a directional station, and radiates relatively low ERP toward Toledo. OTOH, WJR radiates the same ERP toward all compass bearings.

The daytime field intensity of WJR in Toledo ZIP 43604 is about 15X (almost 24dB) greater than that of WWJ.

Per Radio Locator's coverage maps, both stations should have virtually identical signal strength up here in the Tawas area - if anything, WJR's signal should be oh-so-slightly stronger.

However, I can say with absolute certainty that WWJ's signal is almost always significantly stronger than that of WJR.

WWJ in their major lobe puts out 586KW concentrated power daytime and 620KW at night when they go to 6 towers pulling the signal in from the SSW. That is the reason WWJ is stronger to the north. Picture the signal like a garden hose with a nozzle forcing the water out at a high pressure in one direction. That is the best way I can explain it in simple terms.

It's all about the money!

Below is a plot of the Effective Radiated Power (ERP) and the resulting 1.0 and 0.1 mV/m field intensity contours of WWJ during the daytime. According to FCC data and methodology, WWJ radiates a maximum ERP of 381 kW in the horizontal plane, directed toward an azimuth bearing of N353°E.

Also shown at the bottom of the graphic are the 1.0 and 0.1 mV/m field intensity contours of WJR (day & night), plotted at the same map scale as for WWJ.

It is interesting to note that the field intensity contours of WWJ and WJR match quite closely in the sector having the maximum daytime ERP from WWJ — even though WWJ radiates considerably more ERP toward that sector than does WJR.

The reasons for that are the shorter propagation paths of WJR in that sector compared to WWJ, and the additional path loss for the groundwave propagation of WWJ on 950 kHz compared to WJR on 760 kHz.

Also to be noted is the large increase in the land area enclosed by those F.I. values from WJR compared to WWJ, and the lack of nearby co-channel interfering stations on 760 kHz compared to 950 kHz.

This shows the phenomena that J.P. McCarthy and John McMurray used to talk about. That they pretty much lost the WJR signal when they got to Clare on land, but were able to hear it in Canada North of Lake Huron and Northern Lake Huron in John's boats, "The Edge", and "Over The Edge". The more realistic modeling of the Great Lakes conductivity is the reason.

WWJ radiates a maximum ERP of 381 kW in the horizontal plane, directed toward an azimuth bearing of N353°E.

For some reason I got the wrong information.

It's all about the money!

WWJ radiates a maximum ERP of 381 kW in the horizontal plane, directed toward an azimuth bearing of N353°E.

For some reason I got the wrong information.

ERP always depends on the reference efficiency for 1 kW @ 1 km. For many years, the minimum reference efficiency for Class Bs/IIs/IIIs was 282 mV/m @ 1 km @ 1 kW, and many stations operate at the minimum efficiency. In some treaties the reference effificeny for 1 kW at 1 km is 300 mV/m. Another reference is around 306 mV/m for a typical 1/4 wavelength with typical ground system loss. Another reference is 314 mV/m for a theoretical lossless 1/4 wavelength. You could use any reference, since the FCC doesn't define the ERP reference, but it should be specified what the reference is. WKZO for instance, with a full 5 kW nondirectional input, would have less than 5 kW ERP with its relatively short tower unless the reference is 282 mV/m. There is also the theoretical, the standard inverse field, and the augmented pattern for a directional station like WWJ.

The FCC convention is to define the efficiency of an antenna system used by AM broadcast stations to be the e-field intensity it produces 1 km away from it along a radial in the horizontal plane when 1 kW of r-f power is applied across its input terminals.

However this is not the "classical" way of stating efficiency — which is the ratio of the power (energy) at the output of a device compared to its input: Efficiency = Power(out) / Power(in).

There is a single, mathematical relationship between the power radiated by an antenna system in a given direction and the e-field intensity that it will produce for the physical conditions of the propagation path.

The term "ERP" is referenced to power in watts, not the e-field intensity of an e-m wave in V/m.

As noted by CK-722, a perfect, 1/4-wavelength, series-fed, unloaded vertical monopole driven against a perfect ground plane produces an e-field intensity of about 314 mV/m at 1 km when 1 kW of r-f power flows between its feedpoint terminals. Such an antenna system radiates 100% of that 1 kW of r-f input power (e.g., 1 kW).

The daytime array of WWJ produces its maximum far-field gain toward a compass bearing of N353°E in the horizontal plane, as a result of the directional pattern it radiates. The result of that gain may be expressed either in units of field intensity (V/m) at 1 km for the applied r-f power, or in units of the radiated power (watts) required to generate that field.

These two values are uniquely co-dependent. Neither of them requires any external reference other than the S.I. unit definitions for volts and watts.

One of the classic Electricity and Magnetism texts has a question that has an answer in the back of the book for the efficiency of an unattainable ISOTROPIC source, or POINT SOURCE. This is the only radiation efficiency recognized by Physicists. An ISOTROPIC iERP of 1 kW places a field of 173.2 mV/m at 1 km. There is a value called the characteristic impedance of free space which converts the power density to field strength. The value is 120 PI OHMS, or about 377 ohms.

Real antennas utilize elements which theoretically oscillate in one dimension, like a monopole or dipole. This results in a "cone of silence" along the oscillating dimension, where zero field theoretically radiates. The radiation is maximum along the perpendicular dimension, and the pattern of the oscillation gives any antenna gain over the ISOTROPIC. Satellite communications has conventionally used the iERP of their transmissions, even though they are radiated by real, not point source, antennas.

Sorry for this and the next post, but two edits of my original comments were posted, and I couldn't find a way to delete them.
Last edited by Rich on Fri Oct 25, 2019 8:28 am, edited 1 time in total.

In practice, the free-space, far-field gain of a 1/2-wavelength, center-fed dipole (units of dBd) often is used as a reference for the gain of other antennas. As can be shown by mathematics, that dipole has a peak gain of 1.64X (2.15 dB) relative to an isotropic radiator. For the same applied power and propagation conditions, it generates a peak field that is 1.64X that of an isotropic radiator (if such an antenna existed). The directivity of that dipole is 2.15 dBi.

Really, reading this thread makes me wonder. Why would you even think of comparing a omni single tower signal to a multi tower, nearly unidirectional signal.
That multi tower will have greatly different signal levels in different directions and . the single tower will have the same signal level in all directions. I am sure if you could measure the signal from a directional antenna in ALL directions (at the same distance) it would have an average signal equal to the single tower's signal. Only factor would be ground conuctivity along the path to your signal strength meter.
Any argument to this idea ?