Acceptable registrations in the queue through July 24 at 6:40p ET have now been activated. Enjoy! -M.W.

The technical side of broadcasting. Think IBOC is a sham? Talk about it here! How about HDTV? Post DX reports here as well.
Post Reply Previous topicNext topic
32 posts

IIRC I believe that scheme was tried out early on, decades ago, as a method for AM stereo. Fails miserably at first sign of selective fading and pretty much any MW and SW propagation effects.

All the AM Stereo Systems fail with skywaves at Night and groudwave adjacents in the Daytime. You can't put a receiver in wide mode with that happening. You pretty much needed 25 mV/m to make it work well.

Artificial Intelligence is a Child that needs a Parent to guide it through.
Top

These stations operate mainly in 43 meters. 6500 to 7000 kHz. Main channel is 6925kHz, with secondary 6950. Ops use several frequencies in this band, and I've found pirates in practically every band up to 30 MHz. Extended AM band as well.

There is one pirate who runs C-QuAM mode from time to time, one of the old pirate stations of the 80's, X-FM. I logged him in mono a few days back, and he was the best sounding thing on the dial. Very professional production and a great selection of lost songs.

Frankly, these pirates operate better than the majority of commercial radio stations.

Last night was incredible on 43 meter band. The entire weekend was, for that matter. I logged my first Euro pirate in years and there were a lot of stations on in general. Wolverine Radio was on with a full-scale signal on my DX400 sitting on the kitchen table while making dinner. I didn't even have to pull the whip all the way out.

Discovered a great deal of good music and got quite a few eQSL's already.

Wolverine Radio sends out a generic SSTV eQSL after their broadcast (as do most stations). They were playing all songs about cars and travel. This is the one they sent. 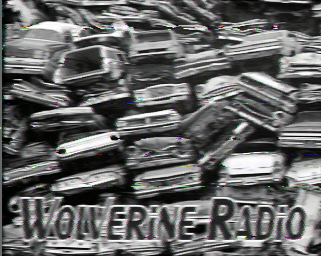 I caught a couple more as well...

Here are a couple from last weekend I just received... 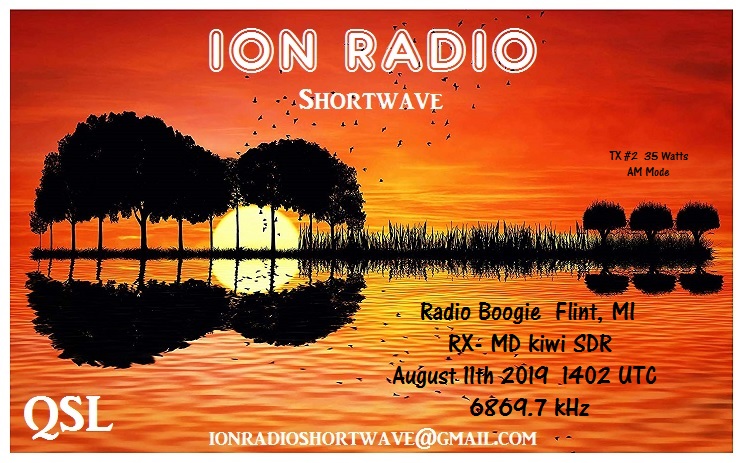 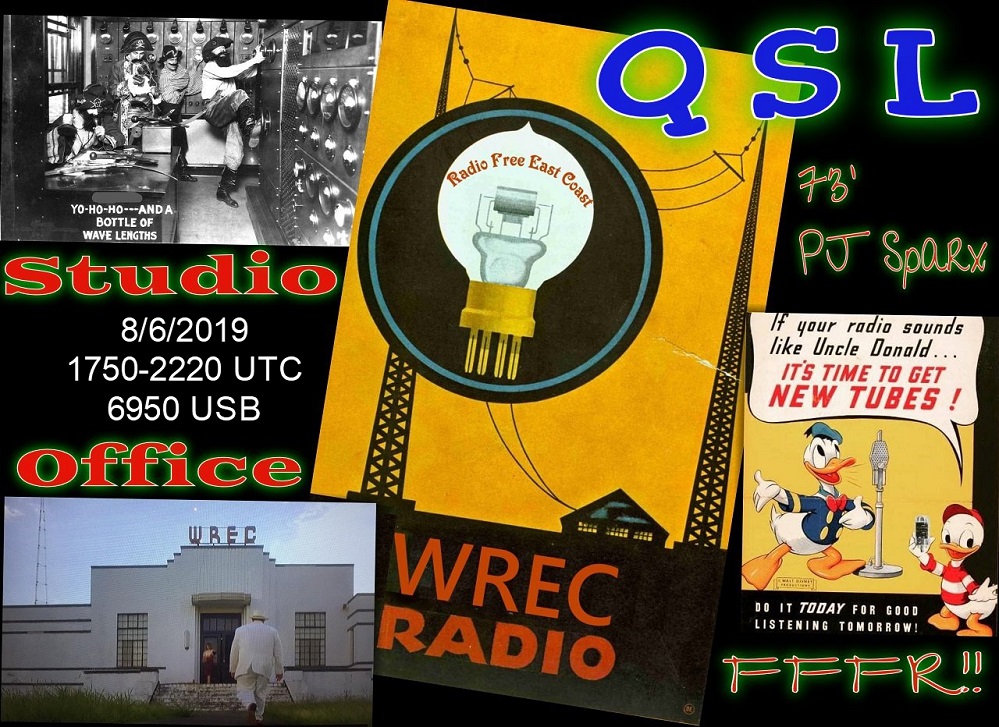 Thanks for posting those. I'll have to try it some time soon. I always avoided pirates because they're illegal. But since they're providing a service that no one else wants to provide legally any more, I forget the ethics of it.

Yeah, seriously. The majority of pirates in the US stay on the 43 and 48 Meter bands, and stay away from government and emergency frequencies. Most also are fairly clean in their operating and content. Some are rebels though and play unedited versions of songs... Euro pirates have a more wild streak it seems, and they operate anywhere there is an open freq. Some have actually gone legit, such as Radio Veronica. They took over an abandoned SW TX site and broadcast on MW. Laser Hot Hits and World Music Radio are a couple more who are legit now. I believe 99% of operators would go legit if there were an "Amateur Broadcasting service" in America. Some Euro countries now allow HF hobby broadcasting as well. They are great DX catches!

There are a few pirates who rebroadcast recordings of past pirates or relay other pirates, which are simply fascinating.

Frankly, the FCC is focused on shutting down FM band ops, they really don't seem to care about HF unless someone is really being stupid. Old Time Radio has been operating 24/7 on two SW freq literally for years, playing OTR programs. They have been heard all over the US and Europe at time. Winter propo is far better for lower HF though. Summer is better for freqs above 25 MHz.

I find a LOT more troubles on the bands from freebanding fishing boat captains and the aero bands on simplex between pilots! There are several marine and aero freqs around 43 meter band, and some have absolutely filthy mouths.

I cannot say I've been really impressed with some "legal" hams on HF. 14313 and the Patriot net on 80 meters in particular. They have pretty much erased any desire to get a ham ticket I had. I listened to the HF ham bands a lot when I was a kid, but there isn't much I care to hear there anymore. If I *did* ever get a ticket, I'd probably just go tech for VHF and 10 meters.

Other than the big power bunch on 11meters, most of what I've heard lately in there has actually been quite cordial compared to the old days.

Honestly, if I could afford the gear, I'd probably try my hand transmitting on HF, but we're struggling to just keep from starving nowdays. I've had offers to make programs or broadcast a stream though, which I just might do... That way I can get on the bands without having to invest in gear and antennas. It's certainly tempting...

Yes, Solarmax... There is an online radio right near their AM site which I'll listen to now and then, and I heard him on air a couple days. He sounds great and there is no mistaking his voice!

Here are a couple eQSL's I got from some recent testing broadcasts I picked up...
Radio Ga-Ga testing at 3 watts in AM with USB.... I picked it up from the midwest to near Flint, MI on a DX440 hooked to a 50' end-fed random wire. 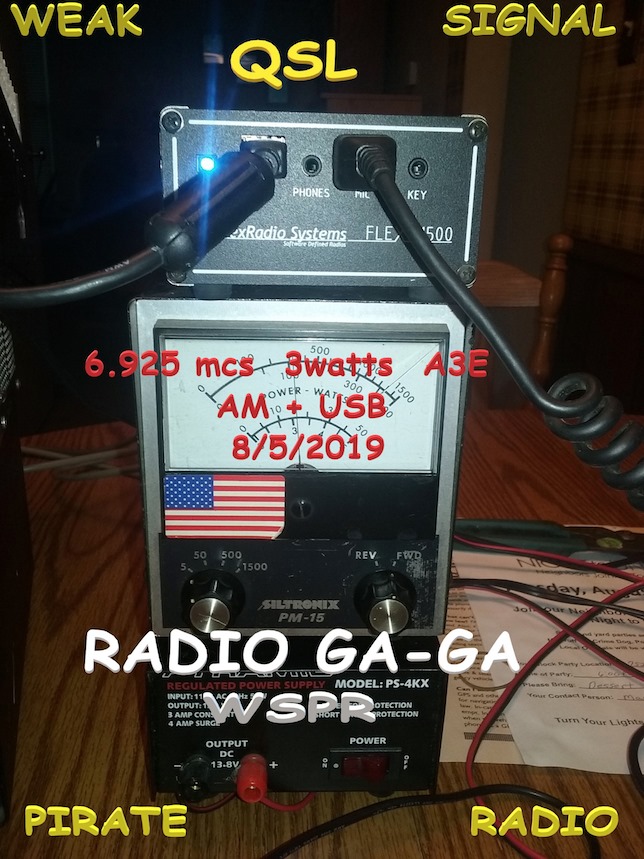 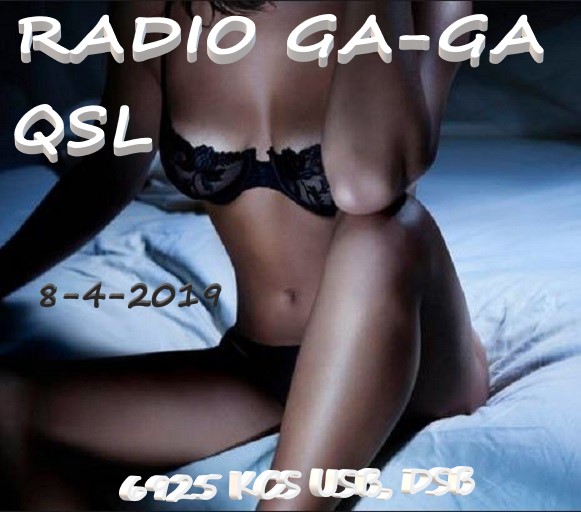 7.415 used to be one of my favorite pirate radio frequencies to DX years ago.

Of the many reception reports I've received from my show being broadcast via pirate shortwave, I recently received the very nice report below. THIS is how I have always done reports, I'm glad to see someone else still bothers to provide details like this, including an attached MP3 file recorded off the KiwiSDR they were listening to. I responded with a nice eQSL card.

I heard you on a KiwiSDR software-defined receiver, connected to a 670-foot Sky Loop Antenna, in Westminster, Maryland. I controlled the receiver from Austin, Texas using the Apple Safari browser on a 2018 Apple MacBook Air (13-inch Retina display, 1.6 GHz i5 processor, 8 GB RAM, 256 GB SSD) over a 1 GB cable internet connection with an Askey 801.11ac wireless router.

I’m attaching a short .mp3 audio file from about 1824 so you can hear your signal.

I’d especially enjoyed “She’s Kinda Hot.” One thing I noticed was the professional production value of your broadcast. It’s unusual to hear a free radio station that sounds like a commercial station. (I hope that’s the sound you were aiming for.). I really like the song intros since I’d heard none of them. Depending on signal strength, the reverb made the voice a bit difficult to understand. The weaker the signal, the harder the voice was to understand.

This was nice in that details about the broadcast, such as the reverb level, were included. It is one thing I was really critical of in the production. I will therefore bring the reverb level down in future broadcasts. It was very WABC-esque reverb level, but hotter in the "mid-field" aspect, which made it sound more "attached" to the voice rather than being under it.

I especially enjoyed producing the program, and as always, I hope to expose really good, obscure songs which you never heard on radio anymore, if ever. Listeners seem to have enjoyed it too.

This was another posting of my program from a couple days ago that was posted on Youtube... [youtube]https://www.youtube.com/watch?v=X4rai2o ... e=youtu.be[/youtube]